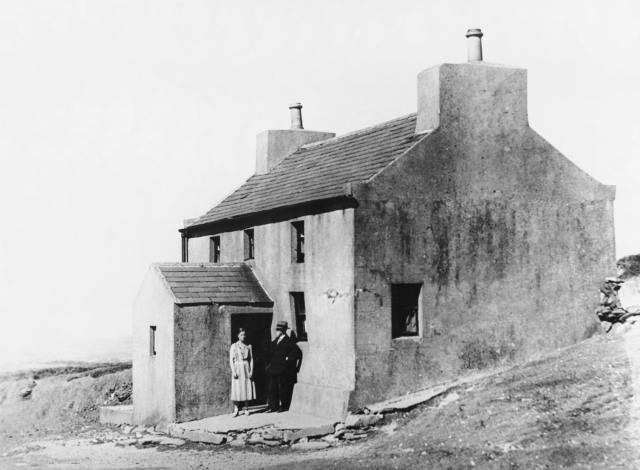 ‘Only fragments and shadows can be summoned to bear witness to that which has vanished.’

The house is strangely featureless, as if most detail had been erased with a rubber, and it were all made of one element. It looks like a house built by someone who does not know what a house is or does. And it is already cracking and falling to pieces. Jonathan Jones: ‘Something has been here before you – something with sharp claws and a sense of humour.’

A girl stands at the edge of a black doorway. She is wearing a simple striped cotton dress and perhaps a hair slide. Nothing about how she stands tells us she will ever step off the concrete foundations. She watches us, her hands held loosely in front of her. A man leans against the wall beside her. He is dressed formally in suit as black as the house interior, a tie and a hat. His hand is in his pocket. His eyes are on the girl.

I have the poet and performer Brian Catling to thank for introducing me to this house. It is not the first house I have ever known. But it is very close. Although there is no strip of blue sky or green grass, and no radiating sun, it is simple and symmetrical and archetypal. It is the house we build and unbuild forever.

‘It’s my home. Nothing bad has ever happened to me here.’ Sonia Szurma still lives in the detached, pebble-dash house in Bradford she and her husband, Peter Sutcliffe bought for £16,000 in 1977, before he became known as the Yorkshire Ripper. Another tidy, featureless house; the single garage where Peter kept his tools, the kitchen where he washed his soiled clothes, the garden where he burned incriminating evidence. Her home.

In the early 80’s Brian Aldiss granted me an option on his 1977 teratological novel, Brothers Of The Head. It is the tale of conjoined twin brothers, Tom and Barry Howe – from their birth on the windswept, bleak Norfolk marshes, to their grooming into a novelty punk band, to their inevitable demise. We never see or hear from the brothers themselves, only learn about them through others. As with Jekyll and Hyde, we can never enter the private rooms of various players, only listen to the accounts of what they say took place there. The witnesses claim the dead and keep them locked away.

Over the years North Norfolk became an escape from the city. Near Blakeney I spotted a tiny house perched on a spit of shingle, half-submerged in salt marsh and mists. I was convinced that was where the Howe brothers lived. The archetypal battle for supremacy began in a tiny fetid bedroom within those four walls; one infant’s arbitrary twitch is rewarded, another’s is punished. Aldiss knew that nursery room: ‘Although I was not an Unwanted Child, I was a Not Much Wanted Child. That is what brings suspicion and inquiry into existence.’

Years later we were finally making the film. I told Aldiss about the Norfolk house, which in fact is part of Blakeney Nature Reserve. It turned out he knew that part of Norfolk well: ‘My wife and I were taking a short break… In fact Margaret and I were not getting on too well at the time. We were driving back home… when suddenly I remembered the nightmare that had visited me in the small hours. It burst upon me like a sudden shower… ‘Oh, what a ghastly dream!’ They immediately wanted to know what my dream was about. The more I protested that it was too horrible to tell, the more they persisted – as one might expect. What I told them was the basic story of Brothers of the Head… ‘

The window of Aldiss’ study in Blakeney looked out across the water to the same tiny house I had seen. When we shot the film we used the house. We installed mum and dad and the conjoined Howe twins. Tom and Barry will always live there.

Like a childhood friend’s house, the cinema always smelt wrong, felt wrong. Without knowing the rules, we bought the ticket, took the ride. We entered to be confronted with a second threshold. Like the artist Mike Nelson’s emotionally charged false buildings within false buildings, ‘the rooms and corridors are self-contained, with ceilings. And yet they’re not seamless. They have a raw, wooden hokeyness, a rankness, a stench of bitter memories… It induced a nameless anxiety in those who experienced it.’ (Jonathan Jones) We are dollied slowly towards the Bates’ house, into the hallway, up the stairs. The visitor’s book in Matt’s Gallery reception was part of the installation. When you signed it was a contract ‘to accept his invitation into a fictional world. If you do this, what Nelson offers – very different from the irony we have become used to – is total immersion in a work of art.’

1931, the Isle of Man. The Irving house. No radio, no electricity, no gas. The north wind coming in off the Irish Sea was an intense irritation to James Irving. It may even have frightened him. So he slathered the entire exterior of the house in concrete. Still the wind penetrated the wintery home he shared with his wife, Margaret, and 12-year-old daughter, Voirrey. So he built wooden panelling throughout, insulated their home against the exterior. And the house fell silent. Until Gef came.

The spitting, growling sounds coming from behind the wooden panelling turned out to be not that of a rat, but a talkative mongoose. It proclaimed its identity in a number of ways: ‘I am of a strange creature. I have hands and feet and you would faint if he saw me. You would freeze and turn to stone or a pillar of salt!’ Gef, an entity or familiar or presence, attached itself to the family for six years by which time they would leave a portion of their food for him during meals.

Paranormal investigator Harry Price studied the case in the 30’s and on occasion stayed at the house. ‘Neither Mr. Lambert [his companion] nor I slept very well. The mongoose problem obsessed our minds and made sleep difficult… We saw numerous peep-holes; cracks through which Gef threw things at doubting visitors; squint-holes through which the mongoose watches the Irvings and interrupts the conversation with facetious and sometimes rude remarks. We saw the runs behind the panelling by means of which Gef can skip, unseen, from one room to another, upstairs or down. In Voirrey’s room we were shown Gef’s sanctum, really a boxed partition, on top of which Gef dances to the gramophone and bounces his favourite ball.’

Over those six years Gef developed a different relationship with each family member: James Irving taught him things, and Margaret provided a flirtatious relationship. But when it came to 12 year old Voirrey, it was Gef who played the active role. He looked out for her, he protected her. From what she needed to be protected, we can only surmise, but years later she managed to step out of that black doorway and off the crumbling concrete. ‘I had to leave the Isle of Man and have to work where people have never heard the story about it. Gef has made me not get married. How could I tell about it to the family of my husband?’

Some 60 years after Gef first arrived at the Irving house, Catling and I tracked Voirrey down to her new home. There was no doubt Gef still existed, no doubt he was still looking out for Voirrey. ‘Some say that all this is engineering because I was a ventriloquist… The story is not an engineering. But I hope it never happens.’ Voirrey died in 2005. Perhaps now Gef is free to return to the Land of Mists from whence he came.

Referring to Sonia Szurma, the Mail Online dishes out the customary punishment normally reserved for returning vampires: ‘Her once flowing jet-black hair is now greying and unkempt. The smart wardrobe – and trademark designer sunglasses – replaced by scruffy clothes, lines under her eyes and unflattering tracksuit bottoms.’  The Wests’ home at 25 Cromwell Street in Gloucester was erased down to its bloody roots. Now a landscaped path cuts through the terrace. Every brick was crushed and every timber was burned. When Brian Catling and myself went in search of the Irving house on the Isle of Man the only trace we found was a wooden post spiked with hammered iron, and a lump of the concrete foundations which I still possess.

Tom and Barry’s house still stands on Blakeney Point. In that house, a third nascent head slept and listened and learned to ventriloquise. This third brother was later to be born on the back of his weaker sibling’s death, in Aldiss’ book if not in the film. There are things that must not and cannot be seen outside and publicly. The notoriety and investigations of the event are now all but forgotten. Only fragments and shadows can be summoned to bear witness to that which has vanished.

‘Vanished! A Video Seance’, by Tony Grisoni & Brian Catling can be watched here.