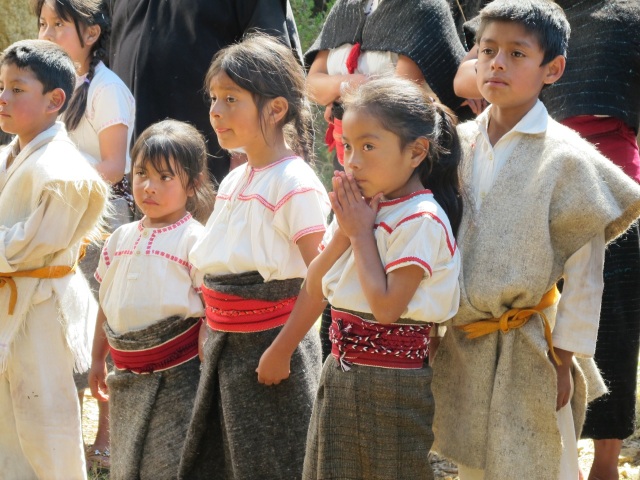 It is easier to say all the things it is not, and only with hindsight am I able to see more clearly what it is. This photograph could have been a film still, yet it was taken in between scenes where no one was acting. It could form part of an anthropological study, yet the narrative it sets up is somewhat false. It could chronicle a local event, but again, it is partly lacking in authenticity. And it feels too intimate, somehow, to have been taken by a tourist. Six years after I took it, I view this photograph as the stage for the story that was about to unfold, a foreshadowing of the various tensions that arose shortly afterwards. It prefigures a certain dynamic, and the contrasting expectations imposed on an encounter. The idea that an image can transfix – that is, pierce through, fix or fasten, across two cultures or individuals – was somewhat put into question.

In the winter of 2010 my sister Eva shot a feature film, The Blue Eyes, in Chiapas, Mexico’s southernmost state and home to the Tzotzil Indians, direct descendants of the Mayas. One of the main locations was San Cristobal de las Casas, a handsome colonial town famously associated with the Zapatistas and still a magnet for idealists from around the world. During the final week of the shoot, I flew out to help as stills photographer.

The Blue Eyes tells the story of a young American couple who travel to Chiapas and soon find themselves caught up in the machinations of a shape-shifting witch. And while Eva’s film tells a fictional story of cultural tensions and obfuscation, she encountered real problems along the way. Recent elections in one of the film’s locations, the Tzotzil town of Zinacantán, had created a shift in local politics, and filming permits granted to my sister’s team by the incoming party (the PRI) were challenged by Indians who supported the ousted party (the PRD). So while the PRI supporters wanted to be involved in the film, some of the PRD supporters decided to sabotage it for political reasons.

A week before my arrival, the crew had been held hostage for several hours by drunken men wielding machetes who accused them of desecrating their sacred grounds – they’d seen the prop of a baby made of resin and claimed it was dug up from their cemetery. However, they made it clear they would forgive all if handed the sum of $10,000  in cash. The crew was finally released after paying the men $1,000, the new amount having been negotiated by the male location manager as the Tzotzil men refused to negotiate with my sister or her female producer. The remaining scenes that were meant to be shot in Zinacantán were instead filmed in the neighbouring town, including the scene depicted in this photograph.

In the film an Indian woman is seduced and abandoned by a blue-eyed American anthropologist. When her baby is born with blue eyes, she kills it out of spite and is subsequently labeled a witch and evicted from the community. For this scene, several dozen Tzotzils were brought in from Zinacantán. The two elders who spoke Spanish translated for Eva: everyone was instructed to shout Witch! and throw papier mâché stones at the thatched mud hut that stood before them. Yet when the camera began to roll, many did not do as they’d been told. Eva asked them a second time to pretend they were angry and throw stones. But we’re not angry, they insisted. It was then that we realised they had no concept of representation; the thought of pretending to be angry when they weren’t feeling anger seemed odd. Why behave in a way that isn’t in accordance with your experience?

During the Conquest of Mexico, the Spaniards put on various religious plays in their efforts to convert the Indians, among them Fray Andres de Olmos’ The Final Judgment. When the Indians saw this production they believed the scenes they were witnessing to be real. According to one chronicler of the time, they were led into cathartic states of terror and compassion, overwhelmed by the lavish stage sets, gunpowder and fireworks.

In a way, this photo depicts a similarly unmediated regard, one untouched by the awareness of artifice.

The children fill the frame. Their faces exhibit a blend of reticence and curiosity; they stare with interest at my sister and the movie camera, uncertain what to make of them, while my sister and the camera stare back. No one is aware of me.

Among the many beautiful young Tzotzils why did I focus that day on Adrianita, the girl holding her hands up to her mouth as if in prayer or a hush? Her dreaminess and timidity set her apart from the others, a certain nostalgia in her face as if focused on something beyond. Her body language is self-effacing, her hands partly cover her mouth. I can detect early signs of the Tzotzils’ deeply patriarchal society—the boy’s stance is more confident than the girls’. But there’s also a difference in posture between Adrianita and the other two; they thrust outwards while she draws into herself.

That day she had a rattling cough and kept staring into the camera, so after a few takes my sister had to ask her to please step aside. Visibly confused, she went to stand by another makeshift hut nearby, her face cast in shadow, and continued to cough. I offered her a lozenge I had in my bag. She accepted it; the coughing stopped. Later, once the shoot was finished, I watched her playing with some other children, laughing loudly as they slid down a muddy slope.

The following morning, with the help of the man in charge of procuring extras for the film, I was able to locate her address in Zinacantán. She was out on the hill helping her father pick flowers, her neighbour Juana said, but she’d ring the father on his mobile and tell them to return. After 20 minutes the family appeared on the back of a pickup truck that had given them a lift and off hopped Adrianita with her hands and hair full of earth. Prudencio, her father, spoke some Spanish, and he introduced me to the rest of the family: her mother, two sisters, and little brother. We entered their home, a cement rectangle with a tin door held closed with a string. The room was divided into sections by hanging sheets of plastic and in one corner stood an enormous altar with the framed portraits of various saints engulfed in fresh flowers.

There wasn’t much time to talk; I was leaving back for Mexico City that afternoon. We quickly established that I would be Adrianita’s godmother and help out however I could. Prudencio would open a bank account in San Cristobal and I would deposit a monthly sum to be used for the children. Before leaving we walked to a tiny shop that sold clothes and I told Adrianita to pick something out. She chose a puffy purple jacket with a hood that matched the colours of her traditional dress, deep pinks and purple. We then took a series of photographs outside their house and said goodbye.

At first, it was easy to romanticise her existence. Extreme poverty, yes, but she seemed to enjoy a freedom and an innocence unfamiliar to most children I’d met, far from the tyranny of gadgets and the internet. With nothing but the plot of land outside her house and the fields and hills beyond it as her landscape, her play seemed purer, more reliant on the imagination. And to my ears Tzotztil sounded like birdsong, while the deep pink and purple embroidery on the women’s skirts and capes resembled the most beautiful of plumage.

Back in Mexico City I prepared a box of things for her; clothes that would match, such as purple pajamas and purple trainers, and school supplies. Yet finding the right doll, which was what she wanted the most, proved a difficult task: after scouring the toyshops and department stores of Mexico City, my mother and I were unable to locate an even remotely Mexican-looking doll; every single one had blonde hair and blue eyes. (My mother finally found one in New York). Adrianita slept on a rug with two of her siblings, so we had a bed and mattress sent from Tuxtla Gutierrez, the capital of Chiapas, to their house.

A few months later Prudencio rang my father in tears. Ana Rosa, the eldest daughter, had drunk weedkiller – used in flower preservation – and died. Upon returning home from the hill they’d found her lifeless on the floor. He was asking for 20,000 pesos for the funeral. I called Juana, who finally confessed several things of startling note. She told me that Prudencio had been using the money I was sending to set up a greenhouse. And that he would lock Ana Rosa up at home, and forbade her from continuing her studies or pursuing any interests of her own. And that the children were anaemic and extremely malnourished, partly because none of the money I’d sent had actually gone to them. After that, all my dealings were with Juana and we decided that I would deposit the money into her account instead. This worked at first but eventually, it created conflict between the neighbours. Juana stopped answering the phone and for a while we lost touch.

While my sister was creating her narrative in Chiapas, I’d been constructing my own, one that also departed from reality, though not as dramatically of course. Mine began with the moment this photograph was taken.

Now, six years on, Adrianita has learnt more Spanish. Her voice has changed. She was six when I met her, now she is twelve. She still doesn’t know what she wants to become in life; perhaps when she is older she will join the local community of women weavers. Someday I will ask her what she remembers from the day in the photograph, and whether she believed the actress was really a witch.

Chloe Aridjis is a Mexican writer based in London, and is the author of the novels Book of Clouds and Asunder.