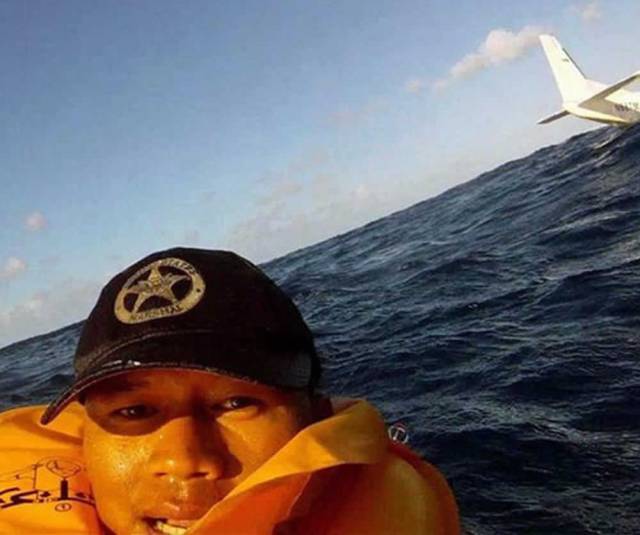 ‘It just bit into me, like am I dreaming’, said Ferdinand Puentes, of surviving this plane crash off Kalaupapa, on Hawaii’s Molokai island in January 2014. It’s a curiously poetic way to explain it. Less ambiguous, is his selfie to mark the occasion.

The modern phenomenon of photographing one’s self with a handheld camera, or mobile device, and then airing the results on social media – the selfie – is now part of the hall of mirrors of digital culture, endlessly refracted across our electronic landscape, as selfies are posted, tweeted, emailed and shared. From MailOnline to Tinder, the selfie rules.

But are selfies self-portraits? Only in the loosest sense of the term, in being both of you and by you. But it is more accurate, I think, to see the selfie as the ‘anti-self-portrait’. Photos like Puentes’ – the ‘I have to make a visual record of this so that I know, and you know, it wasn’t a dream’ selfie – are just one fragment of the phenomenon; albeit a kind of cousin to the pervasive ‘I’m standing with my face pressed against a celebrity’s face’ kind of selfie. An unstated rule is that the selfie-maker must strive to have it appear uncomposed, instant, casual, spontaneous and true – though, in actual fact, selfies lack any of these attributes. Selfies are representations that resist the very idea of representation – which is an idea that sits at the heart of what it means to be painterly.

Selfies are now so much a part of the wallpaper of contemporary culture that lately I’ve found myself becoming blind to them; I just don’t see them any more. It’s as if their very ubiquity – their teeming and intrusive banality – has effected a vanishing act, melding them into a solid wall of ever-present non-signification.

I’m trying to recall when selfies first impinged on my consciousness. In 2000, my husband travelled to Devon Island, a rocky and desolate place on the far Arctic reaches of human habitation. He was there to research a bunch of people trying to simulate living on Mars. Largely alone, and desperate for a record of having visited such inhospitable lands, he turned his camera on himself – though no one thought to call it a selfie at that time. He looked tired but wired, and 10 days unwashed. For a long while – years – he used that picture as his Facebook profile shot.

The next time I would register selfies, there had been a gear-change. It was when celebrities on holiday began digitally sharing pictures of their legs and lower torsos, snapped as they reclined on beach-beds in exotic parts of the world. Quite what the viewer was meant to take away from this new-fangled so-and-so woz ‘ere (and supine) phenomenon is unclear. That the subjects were rich? Pampered? Thin? Tanned? Had a nice pair of pins and an up-to-the minute bikini? Banality, you might say, was there from the start. But the novelty of selfies bought a measure of time for this trend in visual tagging to play itself out.

And so the floodgates opened. The selfie, of course, is now also employed on a massive scale by the non-celebrity, civilian population, and to similar effect: to give the appearance of giving yourself away, without actually doing so. To pepper your electronic universe with stand-ins. To perform your very own burlesque – a teasing visual striptease that says now you see me, now you don’t.

In taxonomic terms, we’ve got mugging, gurning and general tomfoolery; belfies, group-selfies and look-whom-I’m-with selfies; dress-up selfies, dress-down selfies and look-what-I’m-doing selfies; make-up free selfies (posing, if you please, as activism), filtered selfies, selfies with pets, Oscar 2014 selfies and political selfies. I don’t know about you, but I grew exhausted somewhere near the beginning of this lengthy list.

Then, in spring 2014, came the death of Peaches Geldof – not so much the poster girl for attachment parenting as the ‘posted’ girl, pinned to her social media niche like a butterfly fixed behind glass. Here was a life documented daily, and in near-hourly detail, on Twitter and Instagram, where her tagline – ‘Waging a never-ending war against dirty nappies’ – was a paramount exemplar of banality chic. Everything Peaches Geldof wished to promote – from her commitment to mothering, to the clothes brands she represented, to the food her baby boys ate and the bibs she used to mop them up with – was here, in an endless succession of uploaded mobile snaps and videos. Ostensibly, the message was ‘here’s a bit of my private life that I’d like to share with you’. But given how much we now know about what Peaches Geldof wasn’t sharing, perhaps the real take-away is how striking was the dissonance between her lived life and the life she projected.

Of course, all (self)-portraits lie. But the thing about selfies is that by virtue of manifesting an up-to-the-minute rolling reportage on the person they stand in for, they function as avatars. What makes avatars interesting in the world of signs and semaphores is that traditionally an avatar is spirit incarnate, a physical representative of the soul’s true self. There is no better vehicle, you might say, for self-idealisation.

I am hardly the first person to comment on the minor tragedy of Peaches Geldof’s death by accidental suicide. Or on the desperate efforts of a young woman battling her demons in private while trying to persuade the wider world, and probably herself too, that she was a model mother – and losing on both counts. But I do wonder at the extent to which the selfie was an accessory to the crime: an unwitting accomplice to the unraveling of this woman’s stable sense of identity. In being co-opted to serve an ideal of impossible perfection, wasn’t the selfie, ultimately, a force of fragmentation, alienation and explosion?

Thinking about the far shores of ‘death by selfie’ puts me in mind of another photographic suicide: Francesca Woodman’s. Before she took her own life in 1981, at the age of just 22, by jumping from the window of a New York loft, Woodman produced a substantial oeuvre that obsessively worked and re-worked the self-portrait. But with a crucial twist: in Woodman’s work, the subject self evades capture. We glimpse her fleetingly in mirrors, or she lurks half-hidden in the shadows of doorways. At other times Woodman ‘denies her face to the camera’ [her words], or conceals herself behind her hair or her arm, a swathe of gauzy fabric, a roll of cellophane. This is work in which the materiality of personhood is deliberately smudged, and the very notion of the sovereign self questioned.

Woodman liked to work in series. In a group of pictures taken in Providence, Rhode Island, in the late 1970s, she produced a set of stark and nervy images in which, owing to their long exposure times, she is blurred into a wisp-like silhouette against a bleached out empty room. These pictures are almost abstracts, fuzzily balletic, and strikingly beautiful.  Yet at the same time there’s a kind of electric quality to them, a marked tension. Woodman appears to be on the move, crouching, arms swinging down to the ground, like an animal on all fours. It is as if she is avid to escape the frame, avoid exposure, give us the slip and just disappear. The viewer feels implicated. He or she is not just a passive voyeur, but a hunter of prey.

In another group of equally unsettling images, taken in the kind of semi-derelict room she favoured using as a set – empty of furniture, its plasterwork crumbling – Woodman is naked, pressed up against a wall, desperate to blend herself into the wallpaper but only half succeeding, so that you see her and you don’t see her. You see a bit of leg, a bit of tummy, some hair. The rest is covered. The images are all somewhat blurred, ghostly. As with her exposures that use mirrors and doorways, Woodman positions herself with great care in these shots, so that she is expertly poised between absence and presence.

Woodman’s work makes for uncomfortable viewing. And that is intended. She wished to disrupt the taken-for-granted laziness of the viewing gaze, to question its entitlement. At the same time, by making us keenly aware of the viewer, effectively ‘outing’ them as the unnamed presence in her pictures, Woodman evokes a certain creepiness. There’s a whiff of suspicion that she is being watched. Perhaps by a Peeping Tom? Certainly by someone who delights in proximity and in peering into another person’s private world – someone illicit, hidden, who revels in the secret delight of watching without being seen.

This sense of the creepy encapsulates how I’ve felt when I’ve surfed the selfie scene; a little compromised and a little besmirched – tainted by my own consumption.

But then selfies stir up such feelings in the viewer by deliberate design; by blurring the lines between private and public, between access-granting and access-denying, insider and outsider.  They promise one thing, openness, and deliver another: surface. Their stark message is that you can get close up, but you cannot get personal.

Yet if selfies frustrate the viewer, they are a boon to those who wish to expose themselves without actually baring any soul. Thanks to the selfie, celebs can pap themselves, parade their drunken antics and kiss-and-tell indiscretions, and share behind-the-scenes confidences and tawdry confessions directly with fans, without in fact giving anything away at all. It is all surface. All wallpaper.

Perhaps, had she lived, Francesca Woodman would have deplored selfie culture for its phoniness – for being untrue to the idea of exposure. Would she have tweeted, I wonder? Or had an Instagram account? Would she have shared her life on Facebook and her smart phone? Maybe, maybe not. Either way, I doubt she’d have fallen foul of mistaking the faux-realist surface of the selfie for the stuff of life that lies beneath.

A line of thought that perhaps did not consume the eerily calm Puentes, as he bobbed along on the plane wreckage-littered waves.

Marina Benjamin is a writer and journalist. Her books include Rocket Dreams (2004) and Last Days in Babylon (2007). She is a senior editor at Aeon Magazine. She tweets as @marinab52.